It started something big back when Marvel’s Avengers came out with a Black Nick Fury. Look at Black Panther, amirite? Black Panther is like the third highest grossing film of all time. Black Panther was not only set in Africa but the White guy was the bad guy. I mean who comes up with this stuff? (Mostly Jewish guys it seems, Stan Lee or Leiber.)

As Nick Fury, Samuel L. Jackson started that shit. That’s why he had to be so hard on Trump. Jackson thought the gravy boat was going to sail after it just came in. Jackson is getting up there in age but he needs to look out for his race and his dollar bills.

Now obviously, racial or any kind of Group-Real Politik is evil or as I’m sure a lot of the people on this site would say, dumb or just plain ignorant. Ask those naysayers this though: is it dumb and why because a few more Colored Folks just took at least two more jobs created by Jews(Leifeld and Leiber), from Whitey!

Laurence Fishbourne is playing the super smart scientist and Super-Hero, The Black Giant… or Black Giant-Man… I suppose he could just be a Giant-Man that is Black. Fishbourne, if he was hired because of his race or the character was used to appeal to Blacks, that means he is a “Diversity Hire.” You want to call him by that last name I mentioned. You should probably leave the Black part off too.

Either way, I guess leave the Black part off.

Now, some of my Sistas may be asking, “Fro-Yo-Tron, dey got any spots for us?” Emphatically, my Sistas the answer is Yes!

Who here who’s reading this hasn’t heard of Domino? I myself only learned what her power is. Anyway, for whatever reason, the character that once was White: Well that character is now Black. She is also quite androgynous looking… I’m no fan of that. Deadpool did butt stuff in the first movie so, I’m not a fan either way. 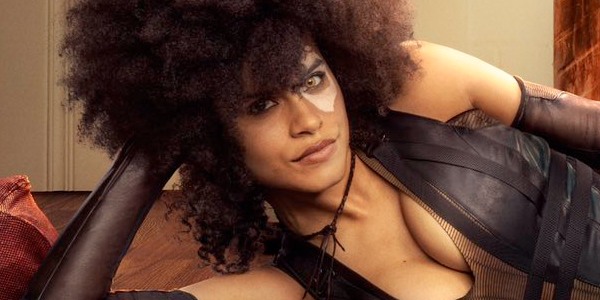 Did they give the part to a “Womyn of Color” because the character is named Domino and da” OGs” play dominos in the park?